Skip to content
When: Wednesday, June 13th at 7pm Where: The Horton Grand Hotel, 311 Island Avenue  Join the Gaslamp Museum for a look at how today’s Gaslamp was created by someone who was part of the transformation! Lecturer Bill Keller owned a business in the Gaslamp for many years will give a first hard account of the creation of the Gaslamp we know today. Downtown San Diego was on a long, slow decline before Horton Plaza opened in 1985.  For most locals the Gaslamp area was a rough no-man’s land, home to porn shops and topless joints.  For those who recall the era, the transformation to today’s vibrant dining and entertainment district is stunning.  It’s historic.  How did it happen? The story can be viewed from many angles.  The City’s Redevelopment Agency created a framework.  Architects and building owners revived classic properties one by one and added new infill projects.  Ingrid Croce took a huge risk in the Keating Building and blazed a trail.  Streetscene brought locals back Downtown while the SD Convention Center and the Padres ballpark generated thousands of new customers. Bill and Joan Keller moved their store for travelers to Horton Plaza in 1985.  They bought the historic Labor Temple Building on 4th Ave in 1994 and moved Le TRAVEL STORE to the Gaslamp Quarter.  They had a street-level view of the transformation, and a seat at the table.  Bill was a board member of the Gaslamp Quarter Assn, the Clean and Safe program, the Downtown Parking Management Group and the DCPC community planning group. Bill’s talk will review how today’s Gaslamp emerged, with a focus on generations of restaurants, clubs and stores that generate such exuberant diversity. History Talks! is a monthly lecture series presented by the Gaslamp Museum at the Davis-Horton House. Each month a local historian or specialist delve into topics related to San Diego and the Davis-Horton House to bring a unique glimpse into the history of our city. Come hear history come alive! 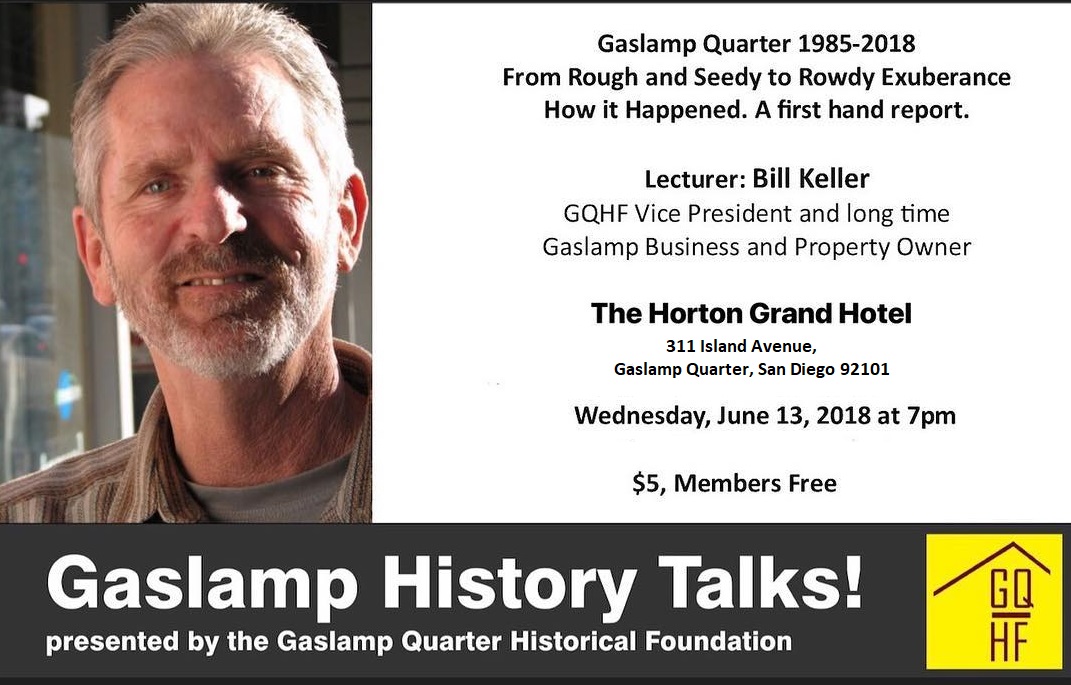