This online exhibit is an except taken from an exhibition at the Gaslamp Museum at the Davis-Horton House in 2009. Digitalization of this physical exhibit is ongoing and may currently lack elements of the original exhibit.

This brief exhibit is intended as a beginning for the study of the Gaslamp Quarter Historical Foundation’s namesake, William Heath Davis and his early years in his native Hawaii. Like Davis, the Foundation’s Museum building is well travelled, having been relocated two times – the first in 1873 when it was moved from State and Market Streets in the now-Marina District to 11th and K Street in now East Village.  In 1984 the building was again moved, into the heart of the historic Gaslamp Quarter.  The building is the oldest surviving wooden structure in downtown San Diego, yet Davis never lived in the building.  He and his young California family lived in an identical structure six blocks from here, which structure was demolished in 1962.

The Gaslamp Quarter Historical Foundation acknowledges the research and writing of Director of Development Dan Haslam in Hawaii and California for this exhibit.  Dorothy Busbee of Chula Vista assisted with research, photography, photocopying and tracking the Davis family sites in Honolulu.   Museum Director of Operations Keiliki Rodriguez (a Hawaiian) executed the artistic style of the exhibit.  Other research and creative efforts were provided by staff member Sherry Linden.   Further research on Davis in Hawaii may be conducted through the auspices of the state historical society in Honolulu, the sole repository for historical documents related to Hawaii.   All of this work was done under the guidance of Foundation Executive Director Melissa Trew (who moved back to California in 2008 from Hawaii, one hundred seventy years after William Heath Davis moved here).

WHO WAS WILLIAM HEATH DAVIS?

William Heath Davis, Jr. is one of the unsung, unknown heros of California history.  For San Diegans he is a virtual stranger, yet it was he who used his $2304 in 1850  to purchase 160 acres of tidal and coastal land, stretching roughly from todays’s Pacific Highway on the west  to Broadway on the north, Front  Street on the east and Harbor Dive on the south.  With four other business partners he created “New Town” San Diego, poised to compete with the existing Old Town.  But New Town would have a modern pier (financed by Davis), with a military outpost to entice a federal presence to encourage city growth.  Davis’s new city was created with fewer than a dozen wooden structures built from preassembled parts shipped from Portland, ME and sailed around Cape Horn.  The idea of moving cargo from long distances was not a novel one for Davis.  His home country of Hawaii had been modernized through goods shipped from America’s New England, a sixty-day shipping journey away.

California’s historians know much about an adult William Heath Davis through his writings about California pre-statehood.  Few have studied his early years or developed a sense of his Hawaiian surroundings from 1822-1838.  This exhibit, “Wm. Heath Davis in Hawaii” attempts to explore those early years based upon historical writings, drawings, paintings and modern day “shoe leather” of attempting to walk the paths and streets where Davis walked in his early years in Oahu.

Come and meet Davis’ blue-blooded, if eclectic family with whom he grew up in Honolulu, early referred to as “Fair Haven” in the Sandwich Islands, now known as Hawaii.   Perhaps you will have a sense of the early founder of downtown San Diego, one of the first council members of San Francisco…the man who took John Sutter down the Columbia River in search of gold in California…the man who selected San Francisco over Monterey to be the northern port of California.

A SAILOR”S LIFE FOR ME:

On April 7, 1843, when he was twenty-one years old and a resident of California, William Heath Davis joined his brother Robert as one of the original 15 men to organize the first fraternal organization in Hawaii, the French Lodge le Progres de l’Oceanie.  The Davis brothers were the only native-born Hawaiians in the group, and most of the lodge members were merchants.  There were five professional mariners, an auctioneer, a sugar planter, and a physician.  Because fraternal life was governed in secret, little was known about the experiences of the organizers.  However, the lodge officers conferred three degrees within the order, apprentices, fellow craftsmen and master mason.  Within four years at least ten percent of the 353 resident male foreigners were members of this lodge.  Because of the volume of sea traders, the local members were often outnumbered by visiting lodge members.  The lodge was initially housed in an adobe home furnished by lodge member John Meek, who captained Kamehameha III’s schooner.  By 1851 and the experience of the California Gold Rush, the Progres lodge was deactivated, and California newcomers to Hawaii set up new Masonic lodges.  By 1854 the le Progres lodge was reborn and relations between the lodges grew tense. The various lodges ceased cooperation with one another at this time.  Robert remained active in the Hawaii lodge system; there is no record of William doing so. 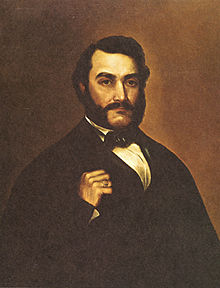 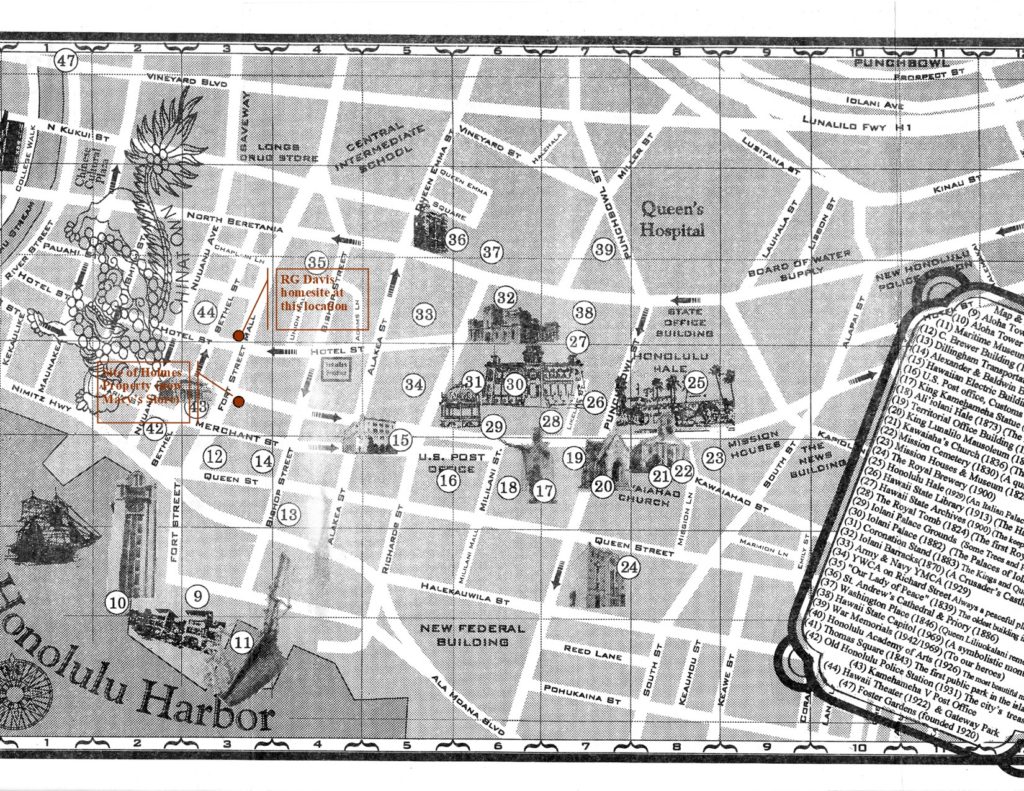 William Heath Davis’s father had amassed considerable landholdings in Hawaii, but at the time of his death, William’s mother had inherited only the residential property in Oahu.  Davis Sr. made large bequests to five friends, including John Coffin Jones, Jr., who would succeed Davis Sr. with Hannah Holmes.

Davis’ mother’s will granted him a portion of her real estate holdings in Honolulu.  His brother, Robert, had to sort out title issues to this property in subsequent litigation, as property boundaries, realigned roads, and faulty memories could not establish specific boundaries for the property, which was located in central Honolulu, now a part of the Macy’s store chain.

William Heath Davis was a lad of nine years old in 1831 when he made his first voyage to California on the bark Louisa. It was on this trip where he earned the moniker “Kanaka Bill.”   He had travelled with Capt. George Wood to Yerba Buena (predecessor to San Francisco prior to 1847) to observe the growing trade between Mexico and the Sandwich Islands.  When he returned to the Sandwich Islands, after his first visit to San Diego, the ship held a hold full of animal hides and a deck load of horses.  In 1833, two years later, Davis would return to California on the Boston Bark Volunteer, and when he returned to California again in 1838 at the age of 16, it was with the intention of remaining in California permanently, to work for his uncle, Nathan Spear, in Yerba Buena and learn the merchant marine trade.  Apparently, Davis’ retreat from Hawaii may have been a hasty one; the local Hawaiian newspaper of 1/27/1838 noted that on Friday, January 21 young William H. Davis (16) was ceremoniously married to Kaimiana.  This was the only historical reference to what may have been Davis’ first, discarded marriage, and he never spoke of it or wrote about it in his subsequent writings.

As a mariner Davis sailed to California under the flag of the Sandwich Islands and did so until 1849, when he flew the U.S. flag.  His ship the Euphemia in 1846 was the first ship to pay US duties to the Yerba Buena duty officer. This ship would later be used as a prison in San Francisco and was ultimately sunk of its coast.  It was Davis who selected Yerba Buena to be northern California’s port city, over Monterey.

IN THE FOOTSTEPS OF Wm HEATH DAVIS TODAY IN HONOLULU

It is difficult, but not impossible today, to imagine the “Fair Haven” or Honolulu of William Heath Davis’s time in the Sandwich Islands.  It is approaching two centuries since Davis was born in Honolulu.  The dirt streets which existed at the time of his birth are paved, widened and reconfigured, although many retain the same names, such as Fort Street, King Street and Hotel Street. It is possible on Waikiki to walk the path that was the King’s Road and imagine the tree-lined street pulling a carriage filled with royals.  It is possible to see the sites of original Davis properties – such as his mother Hannah’s home site at Fort and King (now Macy’s), or Robert’s property at Fort and Hotel (now the entrance to a street mall), or where the original Jones’ store was located (now a parking lot).  But these sites have all been rebuilt several times and are now stores, streets and parking lots.  Some of the old buildings in adjacent Chinatown are reminiscent of what might have existed when Davis lived in Honolulu; however, two major fires in Chinatown, one in 1886 which destroyed 523 buildings a block from the Davis home site, and another fire set in 1900 to rid Chinatown of Bubonic plague.  This latter fire burned out of control and took out some 38 acres of Chinatown and its surroundings.  Other Davis sites closer to the waterfront are now parking lots or newer buildings unrelated to the Davis years.

Just five blocks east from the streets familiar to William Heath Davis are three structures of historical interest, now a part of the Mission Houses Museum, which was established by successors to the original New England missionaries to Hawaii who first arrived in 1820.   The first of these buildings is the Frame House, the oldest surviving wood frame structure in the Hawaiian Islands, precut in Boston and sailed to Hawaii in October 1820, two years before Davis was born.  This structure is probably similar to one owned by John Coffin Jones, Jr., with which Davis was probably familiar.  Perhaps Davis got the idea of shipping New Town San Diego structures from his knowledge of shipping frame houses from New England throughout the world, hence the genesis of the William Heath Davis Museum House in San Diego (1850).  The Mission Houses Museum also boasts the Chamberlain House, a coral block structure used as living quarters and as a warehouse to serve the mission community.  A third building, the printing office, used to print Bibles in the Hawaiian language and other publications and was constructed in 1822, the same year Davis was born.  The artifacts contained in these buildings, plus their presence in a busy downtown capital city, provide an historical perspective as to the surroundings in which William Heath Davis may have found himself at the outset of his long life. 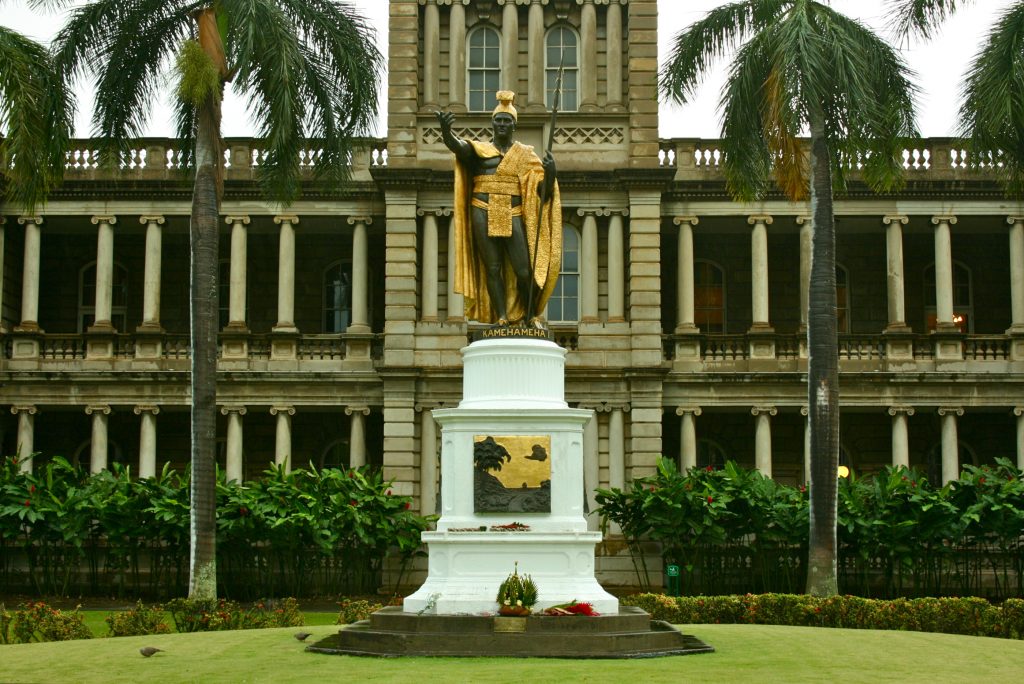